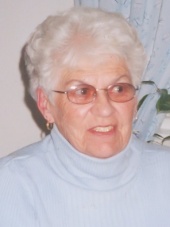 Eula Cathcart (nee Raycraft), a life-long resident of Lennoxville/Sherbrooke passed away peacefully on March 5th at the Grace Village.

Born in 1920, Eula graduated as an RN and married her true love Midge Cathcart during the build-up to World War II. Her family began when her oldest was born while Midge was overseas.  She is survived by her two daughters Judith Rae (Neville Ross) and Patricia, her two grandsons Mitchell (Jen) and Brian (Barb) and two great-grandsons Graeson and Fischer.  She will be dearly missed by them all.

Eula chose a career helping people as a pediatric nurse in the Sherbrooke Hospital.  The lives she touched are countless and her impact on people began in their earliest days.  Eula was active in the community as an avid curler, golfer and bridge player.  She and Midge were equally involved with the Sherbrooke Fusiliers and as members of the Legion & “The Hut” in Lennoxville.   These two were often the life of the party and their company was enjoyed by all who were fortunate enough to be in their presence.  Eula’s list of friends was long, and she mourned many of them over the last few decades.

Eula, we know that you’re back in the arms of your dearest husband and your friends have an open chair waiting for you at the bridge table.  Rest well and we look forward to seeing you again.

At Eula’s request, there will be no funeral and she will be interned alongside of Midge later in the summer.  Should you wish to do so, any donations in Eula’s name should be directed to the war museum at “The  Hut” or to Grace Village.

Sending you my deepest sympathy in the loss of your beloved Mother, grandmother & great grandmother. Eula was a wonderful friend, neighbour and nurse and will be missed by all. May the many cherished memories you all have of your family life and the love of a very special Mother help sustain you during this very difficult time. Eula may you rest in peace with your beloved Midge and know that even though you are gone to your eternal rest, you will never be forgotten and forever loved. With Hugs and my Love to all, Alice (Bassett) Johnston.

Val advised us that your Mother had passed away. When we talked to her at the High School Reunion she was in her nineties but still a force of nature. I find it hard to comprehend how we can be intellectually prepared for things but not nearly as emotionally prepared as we thought. Our thoughts are with you. Condolences to the entire family.
Jim & Ora

Just read of your mothers passing on the 5th March and wish to extend to you and your family my deepest condolences. Your mom was a gracious lady that brought joy to so many people that knew her both socially and professionally and she will be truly missed. My prayers are with you and your family as you go through this time of sadness.