Peru - A co-operative model in Barrancabermeja 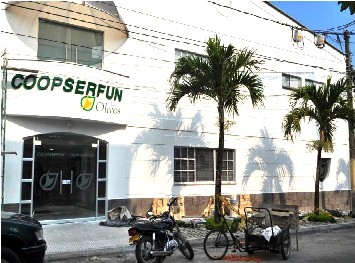 COOPSERFUN, a co-operative for burial services in Barrancabermeja, was founded in 1994. It was the first step towards an important co-operative integration project which got its start thanks to the commitment made by the representatives of 13 co-operative institutions. Today about 35,000 registered members prove the company's stability in its accountancy, technology and human resources.

COOPSERFUN Barrancabermeja assures flexible, adequate, and customer-friendly burial services and tries to meet its customers' needs and expectations in relation to continuous improvement. It is the only burial company in the Middle Magdalena region to obtain the Icontec ISO 9001: 2008 certification, and it is the only one with a crematorium that meets all legal requirements. The co-operative developed the Coopserfun Cemetery Park "La Magdalena" as an additional service to the burial projects for the members' residing in the Middle Magdalena region and its areas of influence. Coopserfun's aim is to assure an appropriate service; since the inauguration of the Cemetery Park on the 1st of March 2008 through August 2011 a total of 1,035 burials and 417 body cremations were been carried out.

Following the path to zero emissions and zero contamination, improvements in the studies concerning the installation of an incinerator are being rapidly carried out. The incinerator is at the disposal of factories, laboratories, clinics and hospitals in Barrancabermeja and in the nearby municipalities. Moreover, the Cemetery Park (30 hectares) land can be used to develop and implement a project concerning rubber sowing.

Description of the co-operative:
COOPSERFUN, a co-operative for burial services in Barrancabermeja, is an ambitious project based on the co-operative model. It was developed in 1994 as a degree thesis by a group of students at the Co-operative University of Colombia (Universidad Cooperativa de Colombia). COOPSERFUN, member of the national burials network Los Olivos, is the only company issued from a solidarity project in the Middle Magdalena region to meet the current legal standards and to be certified by the Icnotec regulations. Even in times of trouble all Coopserfun’s members can rely on a stable company which offers peace of mind and security, has a major influence on the market and maintains its leading position in providing burial services at local scale, thus fulfilling its co-operative aim.